For the past 5 years of my life, I have had somewhat of a secret… I don’t have many of those left these days, but for me my romantic relationships have always been something I have kept pretty much to those that know me personally. This was probably most evident when Courtney Halowell passed away. We had been living together for nearly a year before he passed, and when many of his friends arrived at his funeral, they were surprised to meet me, surprised to know that he had a girlfriend, surprised we lived together and shocked by the lack of romantic declarations and kissy faced photo’s we’d put on Facebook. Almost as though our relationship wasn’t legitimized because, “for a girl who markets herself as a “model” how do you not have a million photos of you and the person you love?” In fact we only had two partial photos. If you notice there are in fact very few photos of me with other people outside of large party pictures. It’s no accident.

It’s the one part of my life that I have kept just for me, for a number of reasons… my first marriage was VERY public, and very publicly messy towards the end. I always hated seeing couples argue on facebook, I felt it completely unnecessary and disrespectful. Conversely I find those private moments you have, the curled up on the couch comfort, the kisses between flipping burgers on the bbq in the yard…those are OUR moment’s, moments I’m really in, moments I’m not trying to loose to my cell phone, my social media etc.

I’m not going lie, this past year in review has had some major ups and downs, the sordid details of which I’m glad to have not posted on Facebook. A year from now I won’t have some awful argument pop up in my memory feed, “Facebook memory – that time you argued over couch color and ended up sleeping on it” If you know me in real life, you know this past year has been rough, in many, many, ways. (much worse than couch color)

So why come out now?

5 Years ago, our marriage reception was supposed to begin at the site of literally one of the largest fires in Santa Barbara history  Deemed “The White fire” it was accidentally set ablaze by a kid who threw camp coals into a trash can, a week before our wedding. The fire burned nearly 2,000 acres before being put out on Thursday, our wedding scheduled for Saturday.

We didn’t call it off, we relocated, at a huge price, and while the smell of smoke lingered it was still no match for the hoards of mosquitoes that came off Lake Cachuma at the start of our reception, or the searing heat that melted our wedding cake, or the fight that broke out, or our close friend splitting his head open tripping over a chair, or the camp host who almost sent a guest to jail for a DUI at 3am.

Fortunately, anyone who didn’t leave early because of the heat, drank enough to forget many of these details, mostly because we ran out of drinking water.

Our DJ played the wrong song for our first dance, some romantic 17 minute long equivalent of  “Innagadadavida” which I had to stop after 4 minutes because I was absolutely roasting in my over-sized ball gown, and 90 degree weather (and did I mention… I got fat) after being a model since age 19 I finally decided to eat… everything…thought I could loose 40+lbs pre-wedding no problem… also kill the man that did my hair… 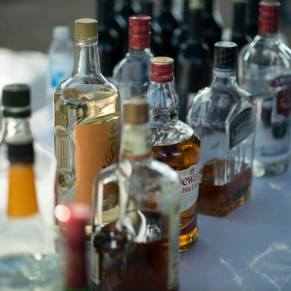 My husband hates this rendition of our story by the way. He still remembers it as a magical day, where the weather was warm, and perfect, and everyone had a great time, it ended with great stories, and us being married.

Fortunately our ceremony went beautifully, with one slight misspoken word during our vows. We wrote letters to each other, and placed them in a box with a bottle of wine to be opened “One Year” after our marriage. Our minister slipped up and said “Five years”

To be consumed and letters read in 5 years time…

So this bottle was bought hastily at Total Wine, for probably as about as cheap as we could get away with. $35? (for us at that time was a lot)….may be vinegar by now…

Hey you have cancer!

My husband and I had always planned to renew our vows at the 5 year mark, but this last year had been tough on us, emotionally, relationship-wise, financially, in virtually every way you could think of. I have been off work for a year on disability for severe depression, and a month before our 5 year wedding anniversary I was diagnosed with cervical cancer, which caught early enough is no big deal for most women, but I hadn’t had a pap since I was 16 years old. I would be checked for everything else under the sun regularly, like a normal woman should, but when it came to that word, I shy’d away. I had been through some trauma at 16 so I always associated a pap with something much more painful, so I opted out every time, which doctors didn’t press on much because most cervical cancer is slow growing, so if you miss a Pap here and there, no big deal… 16 years of opting out, and tomorrow I am opting in to surgery to remove my entire cervix, (and we will see, possibly more), along with the possibility of loosing my ability to have children, hysterectomy, chemo the whole nine yards, this is step 1 and hopefully the only and last step.

Before finding out about the whole cancer thing, my husband and I had done a lot of soul searching, been having a rough time. I’ll leave it at that. We weren’t sure what our next step was, but when life goes from complicated, to life threatening, you begin to look at things differently. I looked at my life, the people in it, the people that stood next to me, talked to me, the people that were kind to me, that helped me and not hurt me, and although my husband and I had it rough, he was still there. Standing next to me, fighting for me, even when I didn’t want to fight for myself. The man that propped me up, my navigator when I got lost. I had gotten to a point in my life where he was the only person that could still find me, the only man who loved me enough to dive into the pit of hell and hold my hand. Walk through fire, stand strong, take an emotional beating, and get out of bed and go to work every day for what? For us, and once more he did it silently, gracefully, letting me make mistakes, never forcing me to be what I wasn’t, we would fight, and I would cry and like the fiery latin woman I am, I could be the destroyer of worlds and he would stand strong, let me finish and try and find the words to calm the storms.

We decided to start over. A lot had happened both good and bad after 5 years, and Matt was, is still here, he never ran away when things got hard, he only fought harder, and being married to me is a difficult, if not impossible task.

I’m messy, passionate, unpredictable, and stubborn. Not only that but its a hard task to be a guy who isn’t a typical “car guy” married to a woman who has spent her whole life drenched in it. Matt is a science guy, a thinker, an engineer, a planner, a man who is passionately curious for the truth.

Marrying a “car chick” without being the typical “car guy” is tricky. To tell men “you should be talking to her, she knows more about cars” that takes balls. It takes a level of commitment and trust that I could never find anywhere again ever. Talk to my wife he says, when it comes to “hotrods, motorcycles, off-road, pin-stripping, art”… and “talk to my husband” I say if you want to know about “physics, science, the universe, quantum theory, intergalactic travel” together, we got this shit covered. Passionate opposites.

We decided to go to Bali. I had always wanted to go but it was always just beyond our reach. With some help from family, we made it happen. This time I wanted to have a ceremony that represented who we were. I didn’t want to try and have the trendy “camp wedding” with mason jars on the table, and burlap. I didn’t want to do what I did before, which is what I felt like society was looking for, big cake, big dress, dance floor, dj, drinks, catering… I wanted to have a ceremony that was about two fiery people. A celebration of the fires we’d been through, and the people we were going to be, two individuals, together for life.

Say YES! to the Dress -linked – Quick Shout Out to Nordstrom (NOT SOLICITED) – This might make you cry…

When Matt and I first re-met (we had known each other in high school but lost touch after a while) we met camping, and over the fire we talked and got re-acquainted quickly. He followed me as I drunkenly stumbled into the river for a brisk night “swim” while our friends laughed, and I watched him spin poi (flaming coals on chains) Yes that’s my husband:

So when we talked about a vow renewal a renewal by fire seemed fitting. Camp fire, fire spinning, we are both fire signs, and our relationship has been through hell and back, and of course our first wedding fire disaster. We are fire people.

We chose The Five Elements Resort in Bali for our vow renewal because of their beautiful location and the fact that they are one of the only places in the world that preforms an ancient fire ceremony, one that was so dangerous to do it was ceased for over 350 years. Sign us up. It was the most beautiful healing experience I have ever had in my life. It is the perfect summary of the balance of love and determination that marriage takes. It is far beyond the pristine, virginal, white wedding, where everything will always work out in the end. It is hot, and messy, and sensual, it is what marriage is really like, and it ends with two people that no matter how hot the flames may grow will still be there side by side. Come what may.

Tonight we are drinking that bottle of wine we put in a box on our wedding day, before I go in for surgery tomorrow, I don’t care what it tastes like, because I will be drinking it with the man I love. 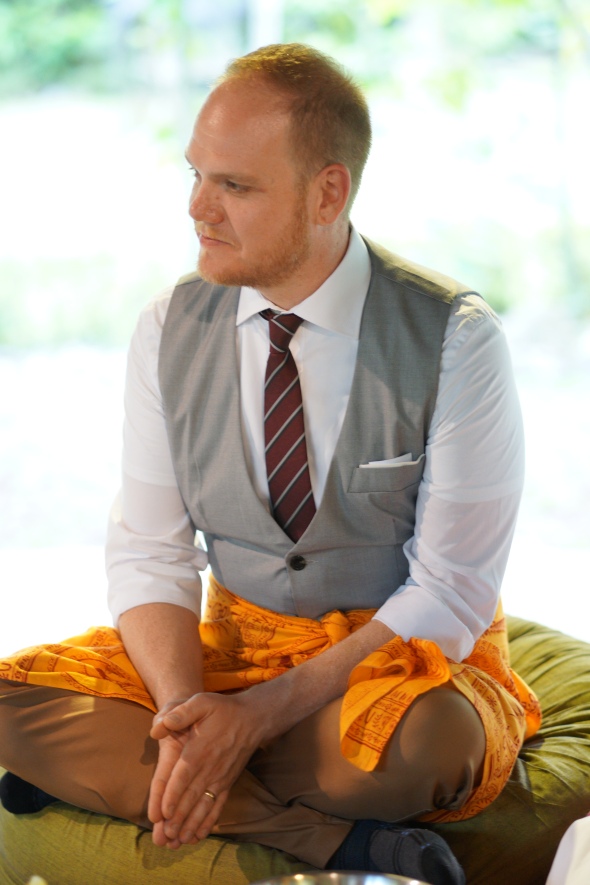 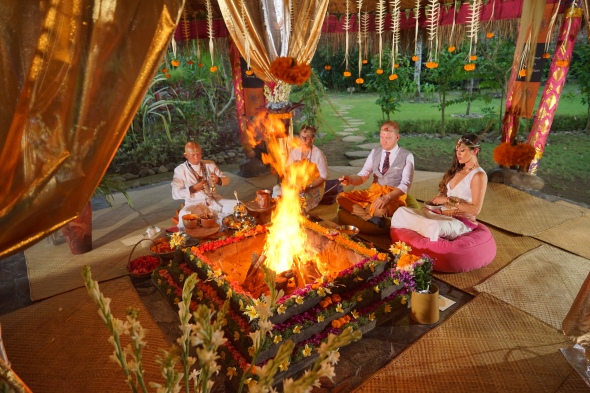 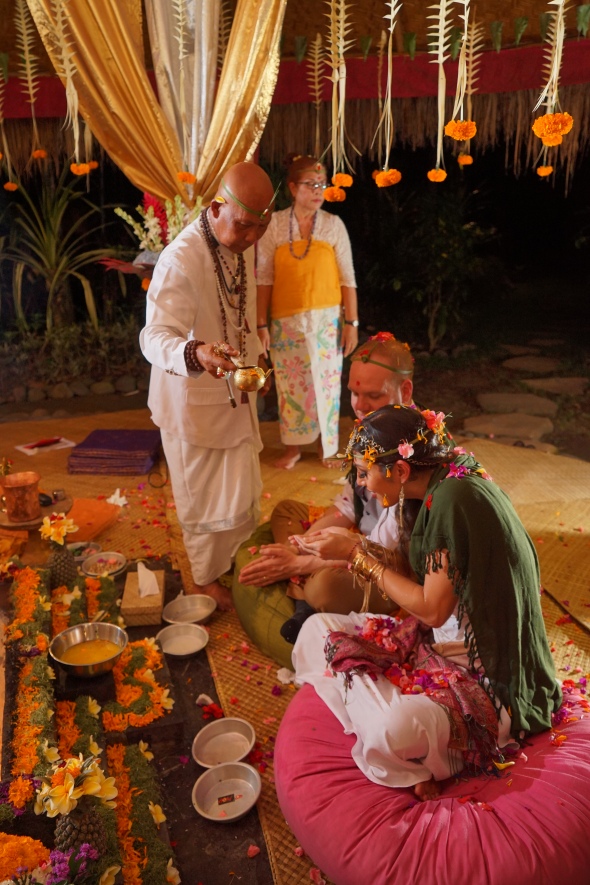 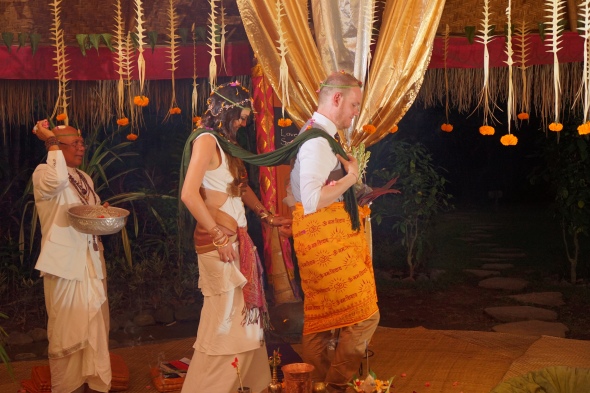 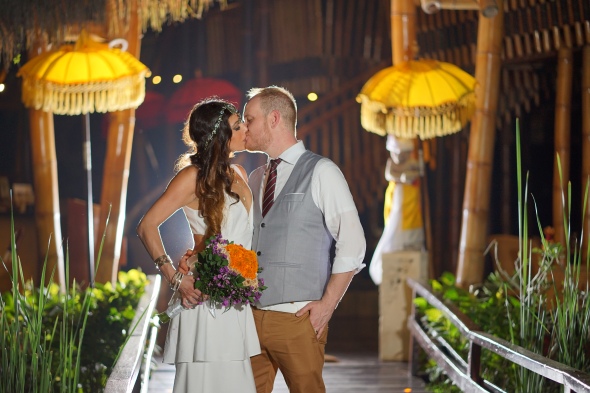 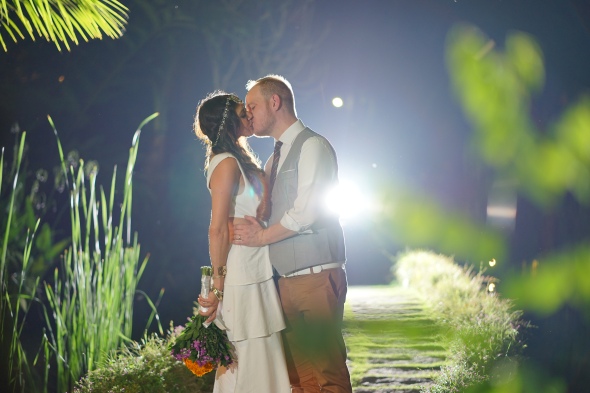 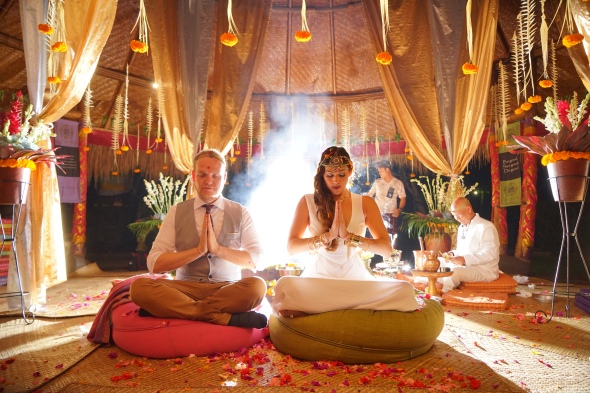 This entry was posted on June 22, 2018 by Ms Cherry Martini. It was filed under Writing and was tagged with bali, cancer, Fire, life, love, marriage, Nordstroms, passion, TheFiveElements, vow renewal, wedding, writing.